Yale MFA 2010 in Painting Born in Guyana Lives and works in Boston, MA

IF GOD HAD A PLAN B THE WORK OF MARLON FORRESTER

Flow. Rhythm. Space are qualities found in my painting. The formal properties of my work, the use of linear perspective and a strongly patterned surface, play against each other and yet produce a kind of dissonant harmony. Their combined effect provides the perfect backdrop for the ambulatory bodies that populate my paintings. Bodies that remain unfixed even as they are pieced together from scraps of paper, bits of drawings and magazine and newspaper cutouts because the pieces are not affixed in a seamless way; their construction appears almost haphazard. Yet, these are warriors bearing the implements – and wounds – of conflict. Bodies. Black bodies, male bodies, broken bodies, serve as the pillars atop which I attempt initiate a discourse on heroicism. The black male body has been crafted into a warring body “under constant assault by history, by the market, and in the art world.” This highlights the paradoxical trope of a broken hero in order to make visible this multivalent assault. Concerned with the corporate use of the black body, or the body as logo, my paintings reflect meditations on the exploitation implicit in the simultaneous apotheosis and fear of the muscular black figure in America. For me, phrases like “fast as a leopard,” used to describe contemporary heroes (sports stars), reassert animalistic monikers that served to describe African warriors as “wild or indigenous.” Emptied by historical manipulations and refilled by contemporary needs, in effect, the Black Hero is always a paradox bound to definitions not meant to include myself.

Born in Guyana, South America, my family migrated to the United States when I was three years old. I spent my formative years in Dorchester, MA. As a student, I was both an athlete and an artist. Thus, it isn’t only the black male body as symbol that interests me, but my own body and the impositions both history and the present make upon it. These considerations aren’t only manifested in paint, but also become apparent in my lyrical freestyle performances. These seemingly disparate practices are in fact intimately intertwined. In freestyle rap there is an underlying form from the beat, but the words that flow, and the verbal virtuosity entailed, falls into time but exceeds the base form of the beat. Under a deeper investigation of formal considerations reveals an essential crux that allows my paintings to cohere. Colors work optically to activate the picture plane giving a sensation of internal movement, that corresponds to a deep interest in music as a way of translating emotional states into visual forms.

I think of pattern as a time-based medium. Mimetic in its articulation of movement that denotes time, the intricate, hand-laid patterns employs, create an undulating, breathing surface. A sensual surface created by highly pigmented, gridded organic forms, which recall the weave and weft of fabric, acts in tandem with Western perspective itself a mimetic production of space that holds flatness parenthetically within its definition. These formal aspects, simultaneously real and unreal, mirror the interaction between black masculinity as a symbol and my actual body. 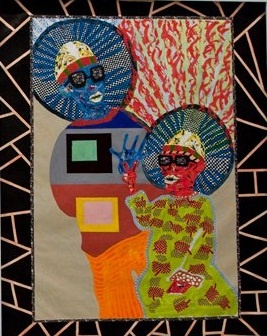 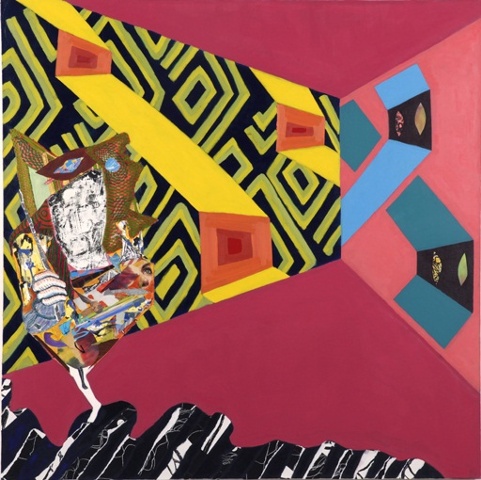 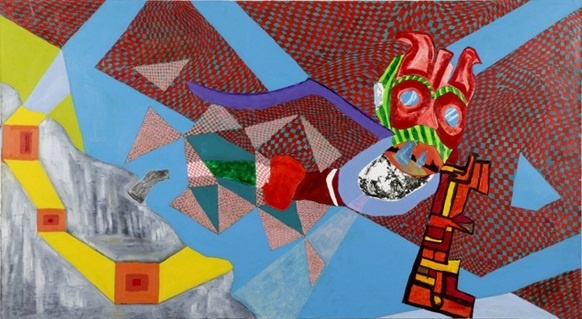