Titled on the stretcher

A frenetic riot of colour and movement, The Space between her Belly Button and her Breast forms part of Dan Colen’s on-going series of confetti paintings and exemplifies the artist’s continuing investigation into the effects of random chance as a key part of the creative process. Colen has spoken of his fascination with confetti due to the sheer unpredictability of utilising this relatively transient, ungovernable material as an artistic medium, declaring that it “eliminates having to make decisions” (Dan Colen quoted in Carol Vogel, ‘A Wild Trip from Bathroom to Gallery’ in The New York Times, September 9 2010, n.p.). The process used to make the confetti works is akin to that employed by Jackson Pollock when creating his legendary ‘Action Paintings,’ in which paint was applied to canvas through energetic gestures rather than with exactingly deliberate intent. With the canvas laid upon a flat surface, Colen throws handfuls of confetti downwards, allowing the material to coalesce and form patterns in a totally arbitrary manner: the resulting intricacy of pattern, colour and texture recalls not only the work of Pollock but also of other Abstract Expressionist artists such as Joan Mitchell. Colen began creating his confetti works following the death of his friend and fellow artist, Dash Snow, in 2009: as a result, the series effectively acts as a form of homage to Snow, with the joyful connotations and brightly variegated colours of the confetti contrasting poignantly with the original impetus for the series. 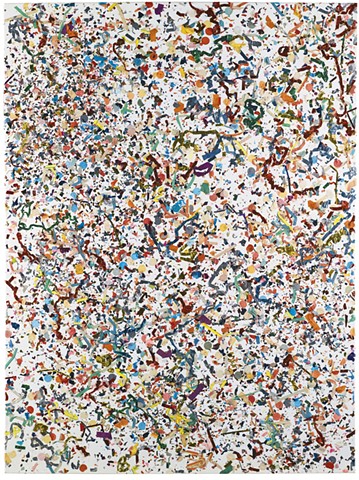 Dan Colen
The space between her belly button and her breast
Paper, mylar confetti and beva on canvas
48 x 36 inches
< previous