Haunch of Venison, London Acquired directly from the above by the present owner in 2011

London, Haunch of Venison, Ahmed Alsoudani, 2011, no. 8, illustrated in colour

Ahmed Alsoudani’s Untitled from 2011 is of one of the artist's most brilliantly executed works to date: a remarkably visceral image of the horrors of war and violence. A writhing, contorted mass of human and animal forms are caught in a ferocious struggle, literally tearing themselves apart in their fear and panic. The nightmarish scene is made all the more disturbing by the inclusion of fragments of domestic objects within the carnage, as though a peaceful family home has been shockingly invaded by the aggression of the outside world. Brightly coloured chair legs float alongside deformed organic matter, books topple off an exquisitely carved wooden table and a string of pearls hint at the form of a woman being engulfed by the turmoil. This devastating destruction of a domestic scene can be imbued with an intensely personal dimension when Alsoudani’s own complex background is taken into account: born in Baghdad in 1975, he fled to Syria at twenty after committing a youthful act of anti-government graffiti, harshly punishable by Saddam Hussein's repressive establishment. Although the artist has made his life in the West, his family remain in Iraq, ensuring that Alsoudani still feels a conflicted sense of personal ownership and belonging to the country of his birth.

The compelling applications of charcoal and acrylic paint, displayed to impressive effect within Untitled, attest to Alsoudani's rejection of strict boundaries between media: "One of my biggest aims is to bridge the gap between the process of drawing and the final product of painting" (the artist, cited in: Sarah Schmerler and Ahmed Alsoudani, 'In the Studio', Art in America, June/July 2011, p. 114). His works on canvas are stretched tight "like a drum" specifically to enable meticulously wrought charcoal drawings, which serve as skeletal forms onto which colour may be applied (the artist in: 'Ahmed Alsoudani in Conversation with Robert Goff', in: Robert Goff and Cassie Rosenthal, Eds., Ahmed Alsoudani, Ostfildern 2009, p. 61). The achievement of depth without recourse to strict spatial perspective lends the work a surrealistic quality, recalling the watercolour and line drawing constructions of Arshile Gorky or Graham Sutherland, whilst harking back to the bodily fragments and piled wounded cadavers by the nineteenth-century painter Théodore Géricault. Ultimately Untitled, 2011, is an extraordinarily powerful depiction of the terror and senseless torment of war, as well as a moving tribute to those caught within conflict against their own volition. 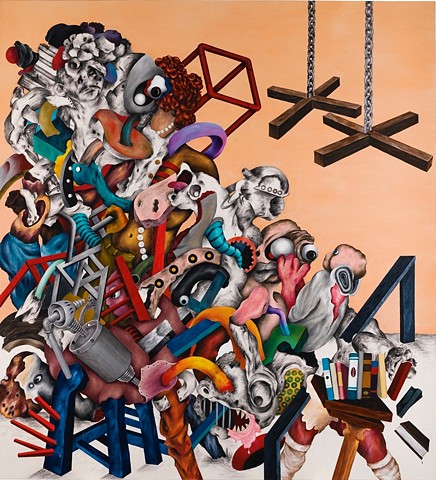