This work is custom framed in a steel frame made for the work in India. The work is in excellent condition.

"Covering Letter 5" is a stunning example of the large-scale paintings that have made Indian Contemporary artist one of the most famous and internationally recognized artists working today. The use of acrylic and mixed media here is a signature of the artist, as is the conflation of graffiti style figural representation, combined with the use of neo-pop colors, outlines of black and abstract patterns. The image of a man at center is repeated four times, each image larger than the next, of a bare cheated with the figural details outlined in heavy black, as if heavily stenciled. Kallat pants each one just slightly overlapping atop the other, as if in a flip book. This standing figure is surrounded by red and white check pattern that fills the negative space. A floating gasoline pump in purple also makes an appearance, a direct commentary on the world's oil and gasoline consumption that is responsible for much of the war and aggression in the Middle East.

At the lower right corner a small rectangle in white has been reserved and inside Kallat has drawn in outline the iconic photo of Satar Jabar, one of the prisoners subjected to torture at Abu Ghraib prison, which as when this painting was created, used for detention purposes by both the U.S.-led coalition occupying Iraq and the Iraqi government. This is just a small touch to the painting, almost unnoticeable, yet its ghost-like appearance in such an otherwise visually intense painting is the type of detail and subject matter that makes Kallat such a talented artist. 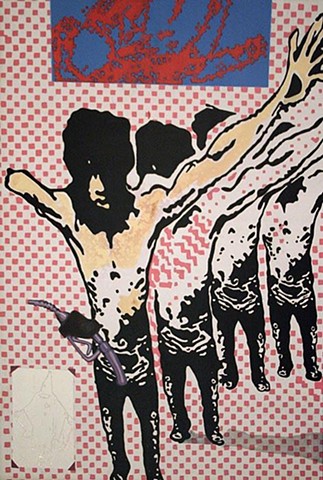