Han Yajuan's "Blue Fly" is one of her largest and most detailed oil and mixed media paintings to date and is a true masterpiece from her oeuvre.

"Blue Fly" is a large-scale, stunning example of the important paintings by female Chinese Contemporary artist Han Yajuan. Here, a group of her iconic female characters whose features are so highly exaggerated that they become a visual metaphor, are depicted all together as a social clique, all with perfect hairstyles and makeup, beautifully dressed and accessorized, replete with all the trappings of wealth and status. In fact, the young women in "Blue Fly" posses so many materials goods that their laptops computers, Gucci date-books, and jewellery literally fall off of them. Their wealth is such that they are totally unaware that these expensive goods are gone, as these 'baubles' are easily replaceable in their world, as they zip through space towards 'new China'. This great attention to detail here, as well as the mixed media approach to the figures and objects that occupy Han's paintings underscores why her work is ground-breaking and important. More than just accomplished works, her paintings are meant to read as highly ironic commentaries on the socio-economic conditions in China and the world in general. This young woman are also independent, and needs no men to accompany them, a comment on changing gender roles in China.

Han Yajun has firmly established herself as of the hottest Chinese Contemporary artists of her 80's generation internationally, known for her compositions that underscore the possession and longing for material wealth, international travel and to be a part of the wider, global community. This desire for material indulgence and mass consumerism by the younger women in China, as well as the growing uber-wealthy class in China, is the foundation for her series of mixed-media oil paintings.

Han was born in 1980 and received her training with a B.F.A. in 2002 from the China Academy Of Art, Hangzhou, China. In 2004-05 she taught at the College of Visual Arts, China Academy Of Art and in 2008 received an M.F.A Degree from the Oil Painting Department, Central Academy of Fine Art, Beijing. Her work is globally acclaimed with representation at the top U.S., European and Asian galleries. Her most recent solo exhibitions was "Indulgence and Transcendence ", in 2011 at Eli Klein Fine Art, New York and in 2009, "Bling Bling" at Chinese Contemporary, New York, as well as "Angels from Hell", in 2008 at Olyvia Oriental, London, UK. She has had additional solo shows at Tokyo gallery, Tokyo, Japan; Willem Kerseboom Gallery, Amsterdam, The Netherlands; PROJECT B Contemporary Art, Milan, Italy as well as shows in Beijing and, Hong Kong. Selected group Exhibitions include her important inclusion in 2011 in "Future Pass", Abbazia Di San Gregorio, Venice, Italy and in "Surrealist Pop", Injoy Museum of Art, Beijing, China as well as "Half of The Sky: Women in the New Art of China", Leonard Pearlstein Gallery, Philadelphia. 2010 saw the work of Han featured in prestigious Museum exhibitions including "Animamix Biennale", Shanghai MoCA Museum, Shanghai, China and "Invisible Wings", Times Art Museum, Beijing, China. From 2008 though the early 2000's the artist was exhibited world-wide, in the USA, U.K., Brazil, China, Korea, Italy, France, Spain, United Arab Emirates and New Zealand. She presently lives and works in China. 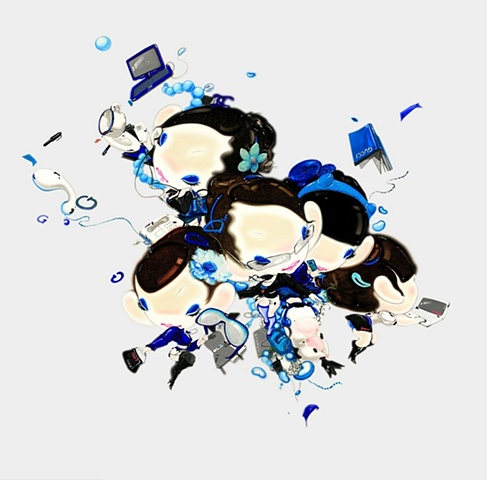