2010 Art Basel Miami Beach, Miami, FL Setouchi International Art Festival 2010, Megijima and Naoshima, Japan (July 19 – October 31, 2010) Viola produced Helena as part of The Transfigurations Series, a continued rumination on the material explored in his epic work, Ocean Without A Shore. Consistent with the movement of other figures from this series, a young girl slowly approaches a thin veil of cascading water, symbolic of the liminal boundary between life and death. However, Helena is distinct in this series as the only figure that chooses not to pass through this transparent boundary. Instead, she reaches only her fingertips through with the playful innocence of a child, reflecting on her momentary transmutation. Slowly, the young girl retreats back through the water to an undefined afterlife or space beyond.

As a capsule moment of the larger Ocean Without A Shore, this video distills Viola’s interest in video’s relationship to painting and to spirituality. He has explored the theme of the figure in water several times throughout his oeuvre to signify a variety of meanings. Five Angels of the Millennium (2001), one of his most ambitious works on this theme and co-owned by the Whitney, Tate Modern, and Centre Pompidou, explores how sensory experience can alter one’s self-awareness. In Stations (1994), at the Museum of Modern Art, New York, Viola uses water to epitomize Buddhist beliefs of the transitory and immaterial nature of the world.

In The Transfigurations Series, his latest examination, he uses water as an expression and definition of the divide between life and death. The poses of the figures also recall moments from historical painting, including renderings of Adam and Eve’s expulsion from the Garden of Eden. The passage of each figure through the watery veil thus symbolizes the moment of transfiguration or metamorphosis of the mortal body into a more spiritual and sentient existence.

In the spring of 2007, I created a new work, the large scale installation Ocean Without a Shore, for the Venice Biennale. It was installed in the fifteenth-century Church of San Gallo in a small piazza near San Marco. The work was inspired in part by Greek funerary sculpture; Michelangelo’s unfinished figures in the Accademia, Florence; Alberto Giacometti’s painted portraits from the 1950s and 60s; and the writings of the Andalusian Sufi mystic Ibn al’Arabi, who described a human being as follows: The Self is an ocean without a shore.

The primary inspiration for this work came from two sources. First, the palpable feeling of the presence of the dead that I sensed strongly while working in the Church of San Gallo and had encountered many times on previous visits to Venice, especially when alone. Second, and most direct, came from a poem by the twentieth century Senegalese poet and storyteller Birago Diop. Here is an excerpt:

African culture is keenly aware of the important role that the dead play in our lives, and has evolved many ways to acknowledge and communicate with the numerous spirits that populate the world of the living. Since losing both my parents during the 1990s I have created my own ways to remember and honor them, and I have been highly conscious of the balance that can be attained when the three great reservoirs of humanity – The Unborn, The Living, and The Dead – are brought into balance. This, in many ways, has been the impetus for my work over the past several decades.

In the autumn of 2007, after Ocean Without a Shore was completed, I decided to revisit the large body of material we had created. During the production we had shot a series of additional sequences involving multiple people and nude studies, and in the editing room had explored some alternative techniques for treating the images. It quickly became clear that a new body of work was evolving and I set to work exploring these new dimensions. Several types of pieces emerged. The works with couples together in a single frame, and a small series of two-panel diptychs added a social and narrative dimension to the work, while the stark black and white images and nudes exposed the vulnerability and personal anguish of the individual. The last new work created was a ‘predella’-like arrangement, a row of six miniature screens called Small Saints. It shows a continuously evolving sequence of six people approaching from darkness, passing through the threshold of water and light (the central element in all of these works), and then returning to the shadows.

The title of the series, ‚Transfigurations&#8219; refers to a rare process whereby both the substance and essence of an entity is reconfigured. In physical terms, a transfiguration is a change in form, a remodeling of appearance. The word derives from the ancient Greek ‘metemorphothe,’ or ‘metamorphosis,’ suggesting a complete reformation. However, the word takes on its fullest meaning in the spiritual context when it refers to the moment when a person or an object is transformed not by external means but from within. The resulting change is absolute and thorough, affecting the heart and the soul of the subject. Although the outward appearance can sometimes be altered in this process as well, it is not necessary. A deeper, more profound, complete transformation occurs inside, out of sight and, for a person it reformulates the very fiber of their being, finally radiating outward to affect everything around it. In Christianity, the event known as the Transfiguration occurred to Jesus on a mountaintop in the presence of three disciples. They described that ‚his face shone as the sun and his garments became white as snow,&#8219; or ‘as light’ in the original Greek. This was a sign that the Godhead and the person had momentarily become one-an affirmation of Divinity. In transfigurations of this sort, a type of energy field is said to radiate from and/or envelop the body of the holy person, a phenomenon described in many sacred texts of both East and West, and commonly depicted in numerous painted and sculptural art works. The language and imagery used to describe these occurrences do not need to be read literally, as the events themselves are not necessarily visual. The key point here is that the transformation of the Self, usually provoked by a profound inner revelation or an overwhelming sensation of clarity and fathomless emotion, overcomes the individual until literally a ‘new light’ dawns on him or her. As Ibn al’Arabi described it:

A morning has dawned whose darkness was you.&#8219; Sometimes this dawning is of such great magnitude that the world is destined to be changed by it. Other times, a solitary mind silently sitting alone in a room somewhere is quietly awakened, without even a whisper or ripple in the cosmos. Some of the most profound human experiences occur at times like these, arising at the outer limits of conscious awareness. These are the transition zones where experience is unstable and life is tenuous, when we are tested to our limits, and sometimes beyond. Invariably, a threshold is reached that demands to be crossed. However, the decision to cross the line, whether real or imaginary, is a serious one and the personal stakes can be high, as the look on the faces of the performers experiencing the work reveals.

For the making of the Transfigurations series, a physical apparatus was built in the studio to create a wall of water and light, providing a tangible embodiment of the inner threshold just described. Individually, the participants were given the opportunity to cross this boundary and to accept any visceral, psychological or emotional reactions that may occur. In the decision to cross over, each person confronted their own self-imposed challenges. For some it was a personal battle, or simply the desire to return to a world left behind, while for others it was an exorcism, or a purification, a rebirth, the conquering of fear, the release from suffering, the loss of innocence, the cleansing of a memory, or the healing of a wound.

Most of the time I did not know the precise nature or origins of their experiences and, like everyone else, I could only witness the outward results of their personal struggles. They were given minimal instruction. My only stipulation was that everyone who came through the water must, at a certain point, make the decision to turn away from the light and return to the shadows. The time here needed to be finite.

The creation of a wall of water and light as the barrier between the physical and metaphysical worlds was a conscious decision. Water and light are the elements that define out entry into the world during the birth process-the difficult passage through the wall of pain, the breaking of the water and the emergence into the light and air. In the studio we created a pathway from a zone of darkness towards the light (and towards the eye of the cameras-one black and white night vision to see into the darkness, the other color High-Definition to capture all the physical details of the material body). A special system was used to create an invisible sheet of water that the individuals would pass through, creating streams of luminous liquid light that appear to emerge out of their bodies. The participants all described how the water seemed to erase their preconceived ideas and wash them into the present moment. Many wanted to go back again. In this way, the water and light threshold, a physical construction in my studio erected by a team of technicians, became an instrument in service to the inner needs of a disparate group of peoplesome professional actors, others artists, colleagues, friends and family members.

As an artist, I find it most satisfying when an idea becomes more than just an assemblage of materials and people working to achieve a certain effect on the screen. I prefer when it takes on a life of its own and is used by others to accomplish their personal goals and desires. This is precisely what happened in the studio during those days in the spring of 2007, and all of us, crew and performers alike, were transformed by the experience, or perhaps I should say ‘transfigured.’ I would like to believe that the experience continues with those who are able to see these pieces in the exhibition.&#8219; 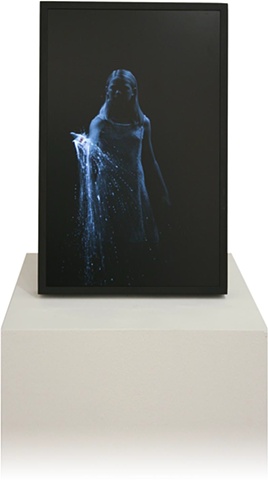